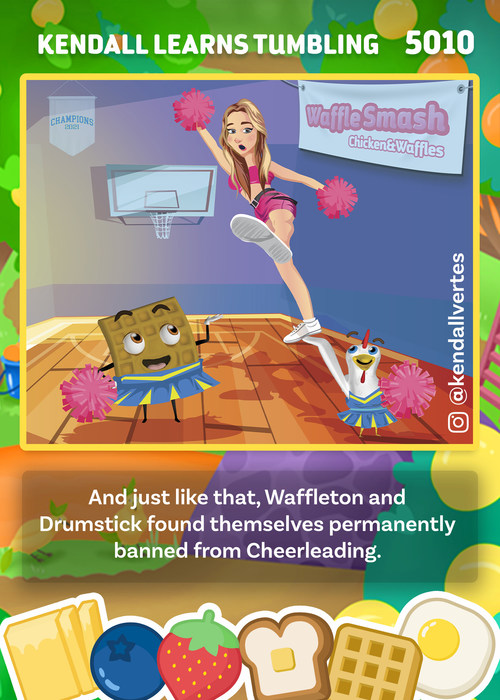 SCOTTSDALE, Ariz., Sept. 24, 2021 /PRNewswire/ -- In a world where every new game apps seem to be giving away cash or prizes to increase their social media popularity, Waffle Smash: Chicken and Waffles, a mobile video game developed by Wamba Technologies, LLC has launched a unique contest which is different than anything  seen before.

Waffle Smash teamed up with Lost Files Media and Piper Rockelle's Squad, an influencer content production house with more than 20M followers, to provide a contest wherein game players can win a new PS5 or MacBook!  Ok, that's pretty standard, but (and it's a HUGE "but"), it's HOW they're conducting the giveaway that is so incredibly unique.  The game has actually incorporated the influencers of Piper Rockelle's Squad (and a few others including Kendall Vertes of Instagram with her 8.4 million followers) and put the influencers into the game itself.

Unlike ad partners of old who were typically unknown to the general public, in today's world, ad partners are often influencers who have a public brand in their very name, image, and likeness.  The ability for a company hiring them to incorporate the influencer's brand into the very product those influencers are promoting is the most efficient application of vertical integration that we've seen in a long time.  This is synergy at its finest and, from a conceptual standpoint, it is truly innovative!

More on The Arizonar
Waffle Smash has added collectible cards to the game.  In addition to the game's collectible cards, there are collectible cards within the game which feature the Influencers interacting with game characters in comical ways.  Every time a player beats a level with a 3-star win, they earn a card. Sometimes those cards feature influencers.  The influencer cards, in addition to being collectible and potentially valuable, contain a code which give the player entries into the Sweepstakes giveaway.   This is the first times we have ever seen mobile game incorporate their ad partners into the actual product itself.

And so, we salute you Wamba and Piper Rockelle's Squad... and wish you all the luck in the world!

Waffle Smash: Chicken and Waffles can be downloaded free on the Apple App Store and Android Google Play Store