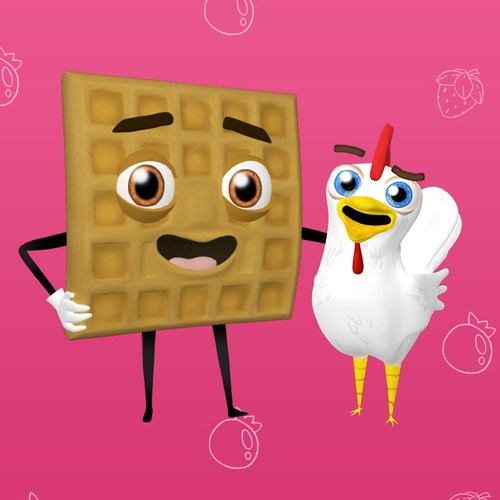 SCOTTSDALE, Ariz., Oct. 14, 2021 /PRNewswire/ -- "Waffle Smash: Chicken and Waffles", the debut hit game from Wamba Technologies, has picked up more than 30,000 downloads in its first 3 weeks of marketing.  Averaging 10,000 downloads per week in its infancy, the game's extremely promising metrics tell of a bright future for Wamba's foray into the world of gaming.

Waffle Smash has held an astounding 41% one-day retention rate on Apple and, while Google Play has done away with retention rate metrics, on Google Play the game seems to have retained around 75% of all of their google users as "active" users based on the metrics that google does provide.  In terms of viewer-to-player conversion rates, the game has consistently outperformed its peers by landslide numbers.

Waffle Smash has teamed up with Piper Rockelle's Squad to collaborate on the game.  Piper's Squad of friends are a very influential group of Social Media influencers with north of 22 million followers on Instagram, Tik Tok, and YouTube.  Between their collaboration on the game and the obsession that America has with Chicken and Waffles, this game checks all the right boxes for a recipe for success.  The only question left is:  have you downloaded it yet?

The game is available on both Google Play as well as Apple's App Store.