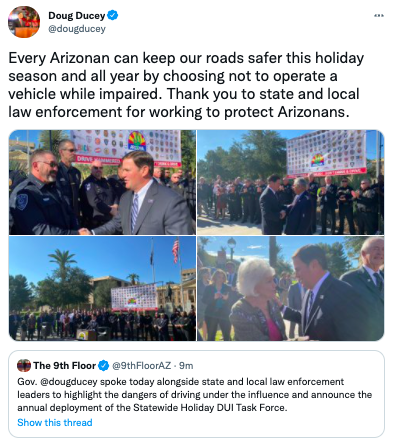 PHOENIX — Governor Doug Ducey today kicked off a press conference with state and local law enforcement officials and industry leaders to discuss the dangers of driving under the influence and announce the annual deployment of a DUI enforcement task force.

"The holidays are some of the most special times of the year — they bring joy and warmth to so many Arizonans across our state," said Governor Ducey. "Sharing a drink with loved ones during the holidays can be cheerful and fun, but it comes with risks. As always, please be responsible when drinking, and if you have more than the legal limit, do not drive. Get a sober, designated driver. Last year, we lost over 200 Arizonans to alcohol-related crashes. Every Arizonan has it in their power to keep our roads safer by choosing not to operate a vehicle while impaired. I want to thank state and local law enforcement for working day-in and day-out to protect Arizonans."

The task force has arrested more than 4,000 individuals for driving under the influence between Thanksgiving and New Year's every year for the past three years. Due to the effectiveness of the task force and other actions taken by the Governor, Arizona has seen a decrease in the number of alcohol-related driving fatalities since 2017.

More on The Arizonar
BACKGROUND
Governor Ducey and the state Legislature have partnered to provide law enforcement with the resources needed to protect Arizonans. Most recently, this year's budget allocated $13 million to equip all state troopers with body cameras.

In March 2018, Governor Ducey signed legislation which ensures wrong-way drivers under the influence of drugs or alcohol will face felony charges.

In 2017, Governor Ducey partnered with the Arizona Department of Transportation and the Department of Public Safety to install a thermal camera system on Interstate 17 that detects wrong-way vehicles entering the highway.
Filed Under: Government, State
0 Comments
Latest on The Arizonar