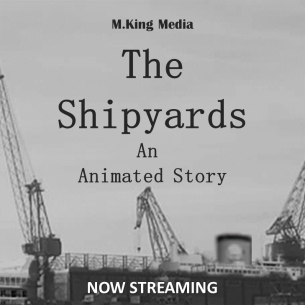 For those waiting on their ship to come in, your ship may not be where you think it is
MESA, Ariz. - Arizonar -- M.King Media, the "Creative Christian Media" organization, on June 16th begin streaming its latest production and 27th animated story: The Shipyards: An Animated Story. The Shipyards: An Animated Story is a single-episode production, produced by M.King (Marcus King) that follows a vision God gave him some years ago.

"You know as long as I've been a Christian, I've always been a firm believer over time that God can reach you in just some of the most incredible ways.," said M.King. "I think it's funny because this came to me almost like a vision. Really, the Lord just kind of showed me you know that sometimes what you're looking for is not out there it's actually in a place you didn't really think it was......a lot closer thank you think."

More on The Arizonar
The Shipyards: An Animated Story is an M.King Media production and can be streamed on mkingmedia.com.

About "The Shipyards: An Animated Story" (7 mins):

An animated story that meets us where we all are, on the edge of life waiting for our ship to come in. Includes commentary from M.King

M.King Media INC. is a faith-focused non-profit based in Mesa, AZ. Founded in 2013, M.King Media has created more than 234 media projects and distributed them all over the world. M.King Media's mission statement is "To Make Creative Christian Media That Point People to Jesus Christ. " For more info go to mkingmedia.com/about-us