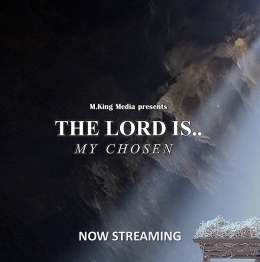 The 9th episode in 'The Lord Is..' series marks the finale for the 3rd season
MESA, Ariz. - Arizonar -- M.King Media continues to release its one-of-a-kind series The Lord Is…, with its last episode for season 3, The Lord Is… My Chosen. The Creative Christian Media organization released The Lord Is… My Chosen on August 31st. The production takes a modern version of God's word and uses beautiful imagery to give a unique experience to viewers.

More on The Arizonar
The Lord Is... My Chosen is a free M.King Media production and can be streamed on mkingmedia.com.

Enjoy this modern take on Psalms 16 in both words and photos along with commentary from M.King (Marcus King).

M.King Media INC. is a faith-focused non-profit based in Mesa, AZ. Founded in 2013, M.King Media has created more than 234 media projects and distributed them all over the world. M.King Media's mission statement is "To Make Creative Christian Media That Point People to Jesus Christ. " For more info go to mkingmedia.com/about-us