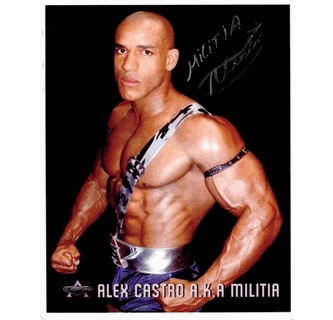 "We are thrilled to have Alex join our Spice team as director of entertainment," said Boris Brodsky, Co-Owner & Managing Director of Spice Resto-Lounge. "We have a talented and passionate group of entertainers and performers, but we are confident with the addition of Alex, Spice will continue to thrive as the hottest nightclub in South Florida."

Castro has been living and entertaining audiences in the Miami area for the last few years and perfecting the skills and talent he first honed while living in Cuba. Castro said: "I am excited to join Spice Resto-Lounge and plan on bringing a level of customer interaction never seen before at this landmark Hollywood nightclub."

More on The Arizonar
Spice Resto-Lounge continues to operate during the pandemic following all recommended CDC health guidelines. The Resto-Lounge's new health and safety guidelines included the following: temperature checks for all guests before entering the building; all staff, servers, bar tenders are wearing face masks; guests are required to wear masks (and provided masks at entry if they don't have) except when eating and drinking; entertainers and guests are required to practice social distancing; and more.

About Alex "Militia" Castro
Castro is a Cuban-born actor and entertainer, who came to America as a refugee. His initial taste of the entertainment world began in Havana, Cuba while working as part of the famous Tropicana nightclub troupe. In 1994, Castro traveled to Miami from Cuba on a boat; he was one of two who survived the trip after being rescued by the United States Marines. Castro joined the US military and served four years; after being honorably discharged, he found work at the Cirque du Soleil in Las Vegas as part of the Zumanity show. Five years later, Castro was invited to audition for the 2008 revival of the popular game show American Gladiators. He was hired and portrayed a steely-spirited character named Militia. After Gladiators, Castro went on to portray Hannibal for a television documentary titled Battles BC as well as make other television appearances including an episode for Burn Notice and Hit the Big Time.

More on The Arizonar
About Spice Resto-Lounge
Spice Resto-Lounge is a tropical, 21+ nightclub, bar and restaurant located in downtown Hollywood, Florida. The Resto-Lounge adds its own unique, "spice" flavor to the tropical nightlife mix in South Florida with its fun ambiance set to Latin music and Latin DJs, bands, performers and more. Bartenders and servers at Spice moonlight as "server-tainers," performing dances routinely and interacting with customers while spicy tunes of merengue, salsa, bachata, reggaeton music and Samba play in the background. The idea for Spice was born out of a desire to provide authentic food and beverages and an open dance floor venue where locals and visitors can have fun, enjoy great Latin music and experience an authentic taste of South Florida nightlife. For more information about Spice Resto-Lounge, visit https://spiceresto-lounge.com/.