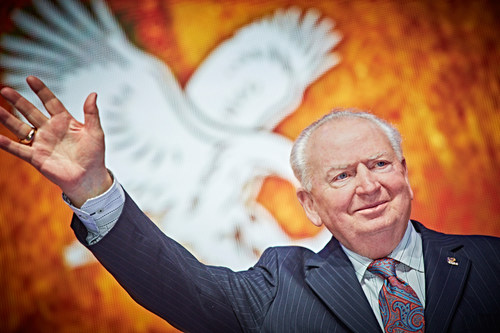 Maughan founded Forever Living out of his garage in 1978. Today, the company is the world's largest grower, producer, and seller of aloe vera, reaching over 160 countries and providing income for millions of business owners under Forever's direct sales model.

"From the very beginning, Rex built Forever with the objective of helping people to look better and feel better through the nutritional products and business opportunity that the company offers. His values of integrity, empathy and fun continue to be at the center of everything we do and are as relevant today as they were 43 years ago".
-Navaz Ghaswala, Executive Vice President, Forever Living Products International

"I am so proud of everything that my father has created. He has touched so many lives around the world and he received the greatest pleasure from seeing others succeed. His legacy will live on for a long time to come".
-Gregg Maughan, Son & President, Forever Living Products International

Maughan was born and raised in the small mountain town of Soda Springs, Idaho. At the age of 19, he carried out a 30-month church mission to the island of Samoa, which he prepared for by learning the Samoan language in just two weeks. He developed a deep love for the island and its people, and made over a dozen return trips in his lifetime, including as Chairman of the Conference of National Park Concessioners to establish the first U.S. National Park outside the borders of the fifty states in 1988.

More on The Arizonar
While working as Vice President of Arizona-based real estate group Del Webb Corporation, Maughan began selling aloe vera products out of his Tempe home. From the very beginning he believed he had a revolutionary plan to offer the best consumable products to the public that not only promoted lasting wellness, but could change personal fortunes. He was involved in every aspect of the business, from designing packaging to delivering sales presentations, and wasn't afraid of getting his hands dirty in the aloe fields.

In 1983, a devastating deep freeze wiped out Forever's entire supply of aloe vera in Texas. Maughan acted swiftly, purchasing land in the Dominican Republic and using his gifted ability to communicate and empathize with people to reassure business owners that Forever would be back up and running in no time.

As the business grew, Maughan continued to make investments guided by one principle: to make the very best product possible and get it in the hands of people so they could have the best opportunity to thrive. He purchased more weather-safe land in Texas and Mexico, as well as opened the Aloe Vera of America facility in Dallas, a distribution center in the Netherlands, and dozens of other strategic locations worldwide.

Maughan's great passion for health and wellness spilled over into his love for nature and the outdoors, and the two went hand in hand with the development of Forever Resorts. Maughan established a number of unique vacation and entertainment properties near his favorite places, including the Grand Canyon, Grand Tetons, Bryce Canyon, and Isle Royale, among many others. The Forever Resorts footprint extends to more than 20 properties in Africa, including the joint resort and hotel management institution, Forever AHMU Academy, in South Africa.

Just as Maughan's enterprising prowess was international, so too was his philanthropy. He gave generously to his favorite organizations including the Arizona Burn Foundation; Arizona State University and BYU; and the Robert Louis Stevenson Foundation in Samoa.

More on The Arizonar
It is in that small Pacific nation that one of Maughan's greatest legacy can be felt. He funded a school and built a library, which bears his name. He financed a clean water project and restored a historic cemetery and worked as part of a team that helped save 30,000 acres of low-lying rainforest on the island of Savai'i. For his incalculable impact on the people of Samoa, Maughan was bestowed the title of Tilafaiga, or High Chief - the first and only foreigner to be given this prestigious designation.

Maughan was a cowboy at heart and never steered too far from his Idaho farm roots. This love for the land led him to becoming one of the largest ranchland owners in Arizona, and he was just as comfortable riding horses with real ranchers by day as he was addressing 10,000 international business owners or meeting with foreign dignitaries by night.

To anyone who knew him deeply, or to those who met him for mere minutes, Maughan was beloved for his generous giving of time, resources, and experiences. He was inquisitive, had a bend toward the eclectic, and always journeyed in pursuit of a great story.

"It is never old-fashioned or out of style to be nice to each other, to honor your commitments, and to treat people how you would wish to be treated.
Never forget that we are all a part of something special, our business has been built upon taking the road less travelled. It may not be as fast and as shiny as some might want it to be.
But take it from me, a road less travelled is more rich, more wonderful, more fulfilling, and more lasting than you can ever imagine".
-Rex Maughan